Book Feature: A Glimpse of Youth by Gary Beck

Featured Book: A Glimpse of Youth by Gary Beck 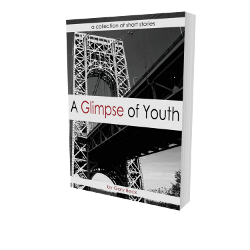 A Glimpse of Youth is a collection of stories about a boy who grew up in the 1950s, in Brooklyn. They explore his early teens when he is still innocent, going camping with his two close friends. He joins a street gang to avoid being beaten by them. His life in the gang includes a camping trip with the gang that ends in disaster. Growing disillusionment with the gang leads to the three friends making a plan to leave the gang. One of them dies in an accident; and in the last story the boy is 18 years old, has left the gang, is going to college and experiences the huge loss of his first love.

A story from the collection of A Glimpse of Youth by Gary Beck "In The City, Lost"

I slipped my leather motorcycle jacket on, checked the many zippered pockets and walked towards the door.

“Where are you going, Billy?” called my mother.

“Out,” I replied without stopping.

“Be home by eleven o’clock,” she admonished. “You have school tomorrow.” “All right. See you later.”

The night was cool, with a hint of early winter, and the snug jacket felt as comforting as body armor. I headed to the corner and slowly walked towards the parkway. I thought about what could happen tonight and I was afraid. I could only imagine injury to myself, not to anyone in the other gang. It didn’t occur to me that the members of my gang could get hurt. The thought of myself lying helpless on the ground, being stomped by the other gang, was with me constantly. I tried to calm my fears with the hope that the fight would be postponed, but I found little consolation in such a far-fetched wish. I turned onto the Parkway, saw the Falcons clustered at our hangout and joined them.

We gathered on the corner in the twilight. By dark the entire gang was there, except for Joe Shlitz who sent word that he was sick. Yet others were as afraid as he was. Some of us sat tensely and silently on the benches, awkward and twitching; others leaned on the time-tinted iron railing of the bicycle path and boasted of past fights or told dirty jokes in loud, raucous voices. Most of us wore black motorcycle jackets and faded levis, with a few boys wearing khaki fatigue pants. The school of stomping wore western or army combat boots. The more aesthetic devotees of kicking favored narrow, pointy shoes.

We waited on the corner in the darkness for news of the other gang and we began to get the feel of our weapons. Some of us had garrison belts, with the edges of the buckles sharpened. Bicycle chains and short clubs were preferred by most. A few boys had push-button knives or zip-guns, which they would use when their fear or viciousness got the best of them.

Suddenly someone ran towards us from the next block. We tensed and gripped our weapons. It was just one of our gang who was posted as a lookout. We relaxed by jeering at each other’s nervousness. We huddled in the night shadows trying to find courage in nearness. Most of the joking stopped. We avoided each other’s eyes, hoping to conceal our fear. Yet we desperately wanted to know that others were afraid.

The night noises of Brooklyn in the fall, the cars racing up and down the broad parkway and the timid, surreptitious looks of curious passersby distracted us no longer. Each of us sat in a hidden inner self, isolated from the others, no longer bragging, and wondered the same thing: when were they coming?

I sat apart from the others on a stone bench with wooden slats that had been defaced by inscriptions carved by vandalizing youths. They were mostly names followed by dates, along with the usual obscenities. My mouth was dry, my body trembled and my heart throbbed loudly, but I tried to appear hard and nonchalant. Most of us were struggling to control our fear. Any signs of cowardice were pounced upon with scornful contempt. We bolstered our flagging courage at the expense of anyone who could not conceal his fear. My mind raced frantically through excuse after excuse that could get me out of the coming fight, but I couldn’t think of anything that would enable me to leave without losing face. I wasn’t secure enough to risk being called a punk. I had just joined the gang after they had beaten me up for months and I couldn’t take that again. I resigned myself to what would soon happen.

Time passed slowly as we waited. I thought of the boys in school who I tried to impress with stories of gang-fights. It was different now that I was finally confronted with one. My boasting seemed hollow and pathetic. I fervently wished to be anywhere else to avoid the pain and terror of two bands of young savages clashing in the night forests of the city. Why was I helpless to escape this situation? Would I lose stature in the eyes of petty hoodlums if I made a weak excuse to leave? But I knew the isolation that would follow if I didn’t fight. The only boys in the neighborhood who accepted me were in the gang. Without them I would be persecuted by another gang. And most of all, I was too lonely to throw away even this frightening companionship, despite the risk of injury to myself, or to another confused boy made vicious and cruel by aloneness.

Our lookouts came running towards us. Behind them, halfway down the block, was a dense mass of thirty-five or forty boys walking slowly towards us. We clustered together as they came closer and we began to move towards them. My hopes of the police showing up disappeared. They only seemed to bother us when we weren’t doing anything wrong. My longing for some sensible and determined adults to stop the fight dissipated with the sound of our weapons slicing through the night air.

We spread out in a shallow arc and collided with them. After the first frantic exchanges the fight devolved into clumsy, individual combats. Furiously swirling figures madly attacked anyone within reach. A sallow, thin, red-haired boy swung wildly at me with a cut-down broomstick. He was instantly carried away by the tide of battling bodies. I followed him hesitantly, unsure of what to do. I was suddenly knocked down by two charging boys, but they didn’t hurt me. I crawled out of the immediate area of the fight, lurched to my feet and tried to see what was happening. I couldn’t tell who was winning and started towards the fight again.

Three boys from the other gang had Pony, our gang leader, pinned on a parked car and were punching him. I rushed towards them. I hit one of them with my belt and he stumbled off holding his head. One of the remaining boys turned on me. I swung my belt and he entangled it with a chain. We both dropped our weapons and started to punch wildly at each other. Then the unmistakable sound of a shot pierced the darkness. Everybody froze and the fight stopped. Their gang moved away from us and started to run. Near us, in the dark shadows of the night, a boy was lying in a dirty Brooklyn gutter. The hot blood gushed out of him, steaming in the night, and his life ebbed away. It was one of their gang.

We ran for five or six blocks, then paused to catch our breath. There were some brief inquiries about injuries, but aside from bruises no one was seriously hurt. We stood in an awkward group that shifted uncomfortably. Someone said that a boy in the other gang had accidentally shot a member of his own gang. This brought audible sighs of relief from some of us. Three or four boys started to boast about how they beat their opponents. Pony thanked me for helping him and told everyone what a tiger I was. But most of us, as though this were the most shameful part of our sordid episode, silently and self-consciously left.

I walked home alone. The sound of the wind gently rustling the stiffening autumn leaves soothed me. I reached home, unlocked the door and answered my parent’s inquiries with practiced glibness. I went to my room, closed the door and slowly undressed. I lay on the bed, naked and thoughtful. I wished that I could escape to another land where, when I awakened in the morning, I would not have to resume the life that tormented me. I wanted someone to tell me how to change my life. I needed the strength to cast off the friends I did not want and stop the violent actions that were not the real me... But there was no one to turn to. So I tossed fretfully and imagined myself lying lifeless in the dank, filthy gutter. Eventually I slept a sleep of tortured dreams.

Watch the Official Book Video Trailer for A Glimpse of Youth

Praise for A Glimpse of Youth: 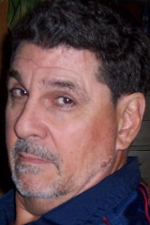 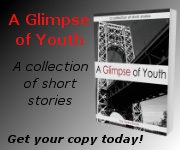