Book Feature: The Girl in White Pajamas by Chris Birdy

The Girl in White Pajamas 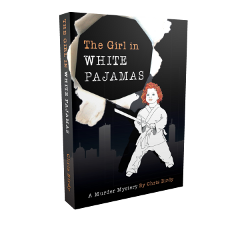 When Officer Bud the PR face of the Boston Police Department is gunned down, his brother, Bogie McGruder, returns from Palm Beach for the funeral. Since the BPD is investigating the death of one of their own, Bogie believes his trip to Boston will be a short condolence visit and a chance to meet his secret love child. But interacting with a family fueled by alcohol and mired in scandals, Bogie is reminded why he does investigations for his Boston based company from a computer in Florida.

Although Bogie wants to contact his ex-lover, Bailey Hampfield, he’s reluctant to do so since Bailey dumped him four years earlier. Knowing that Bailey had his child after she cut him loose, Bogie ponders how he can establish a relationship with the three year old daughter he’s never met. While he thinks about it, Bailey gets in touch with him and asks for protection. Someone is trying to kill her. By the time Bogie meets Isabella, it’s apparent that he still loves the mother and adores the child.

Bogie tells himself that he’s not interested in the BPD investigation into Bud’s death, but he continues to be drawn into it while trying to discover who is attempting to kill Bailey. The investigations seem to parallel each other, then intersect and become intertwined. As the story develops, Isabella, a precocious child obsessed with martial arts, slowly becomes the focus. The underlying theme of this mystery is lies. Everyone seems to be running on lies and half truths. The only pure and true character is The Girl in White Pajamas.

Chris Birdy was born and raised in Pittsburgh, Pennsylvania. After graduating from high school, she did a four year stint in the Middle East. When she returned to the States, Chris settled down in the Boston area and became a true Bostonian by collecting college degrees while raising a family. For more than twenty years, Chris has been a member of the legal community performing investigative work for Boston law firms. Chris lives outside of Boston and in Palm Beach, Florida with her husband.  The Girl in White Pajamas is published by Hillcrest and Createspace and is available online at Amazon , Goodreads and Barnes and Noble.

Official Book Video Trailer for The Girl in White Pajamas

Praise for The Girl in White Pajamas: 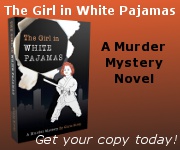